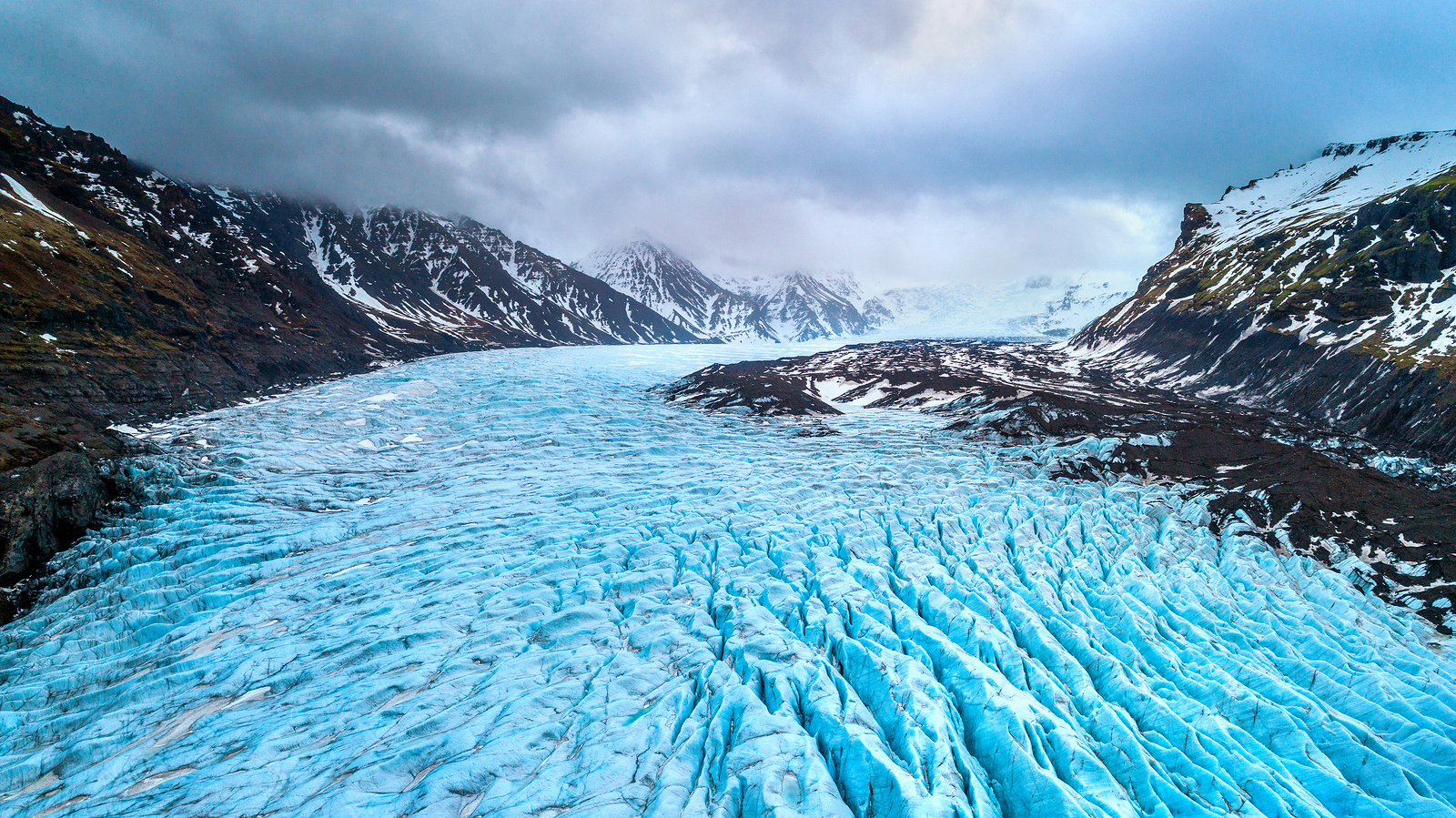 Iceland boasts three National Parks across its wild landscape. Iceland’s national parks are Vatnajökull, Þingvellir and Snæfellsjökull. Each of these parks offer an array of activities and attractions for visitors to enjoy and are home to wonderful examples of Icelandic animal and plant life.

Iceland’s largest National Park is Vatnajökull. The park was founded in 2008 and encompasses the whole of the mighty glacier of the same name. Vatnajökull glacier covers almost 15% of Iceland’s entire landmass, making it quite the sight to behold. Vatnajökull National Park is located in Eastern Iceland spreads far into the interior of the country, such is the size of the park and glacier.

Activities and Attractions at Vatnajökull
Due to the sheer size of the park, Vatnajökull National Park is home to some of Iceland’s most amazing attractions. During the winter months, glacial tunnels are accessible underneath the Vatnajökull glacier which can be viewed as part of tours. The interiors of these tunnels are unmissable if you are visiting Iceland in the winter and make for unbelievable photo opportunities.

Other noteworthy attractions within the interior of the park include the famous Jökulsárlón glacial lagoon, Laki volcanic fissure, Svartifoss waterfall, and Stokksnes mountain. The park is a haven for outdoor lovers including hikers, backpackers, and photographers.

Though Iceland’s vegetation and wildlife can be limited in areas due to harsh conditions, Vatnajökull displays excellent examples of both.  Due to the mild climate of some areas of the park, multiple types of plants can be seen here, including birch trees and many types of moss and lichen, as well as flowering plants.

More than 30 species of bird can be found throughout the expansive park, making it a delight for birdwatching enthusiasts to visit. For those eager to catch a glimpse of Iceland’s few mammal species, there are plenty of opportunities to view mink and arctic foxes. Along the coastal areas, including Jökulsárlón Glacial Lagoon, you can find seals and sometimes even whales.

The Vatnajökull glacier is estimated to be more than 2,000 years old and is one of the largest glaciers in all of Europe. The glacier is so large and diverse that there are volcanos hiding beneath the surface of snow and ice. Some of the volcanos are active to this day and still erupt from time to time. The geology of the park is fascinating, complete with mountains, lakes, valleys, rivers, waterfalls and of course, volcanoes.

Þingvellir was Iceland’s first national park, originally founded during the 1920s in an effort to conserve the site of Iceland’s national parliament. The site was established in the 10th century, so understandably is a national treasure to Iceland. The park has since been expanded and is a UNESCO World Heritage Site and definitely worth visiting on your trip to Iceland.

Activities and Attractions at Þingvellir

One of the post popular attractions in the park is the Silfra Fissure. Not only is Iceland set on an active volcanic area, but also along the border of two tectonic plates. Silfra itself is a glacial spring set along the boundary of two tectonic plates, meaning divers can actually swim between the two plates. Because the spring is fed by glacial water, it has some of the clearest waters in the world.

If you’re interested in Iceland’s history, you’ll want to pay a visit to Lögberg, or the Law Rock. This is where Iceland’s parliament was originally held so it is historically significant, but the dramatic views of the surrounding landscape are also worth viewing.

Other notable sights in the park include Öxarárfoss waterfall, and the Almannagja gorge, which runs along the edge of the North American tectonic plate.

Lake Þingvallavatn within the park attracts nearly a hundred different species of birds over the course of the year, with many passing through on their migrations. This makes Þingvellir another fantastic spot for bird watchers hoping to view the great northern diver and other magnificent species.

Þingvellir National Park is also home to many hearty sheep which are always a joy to see and there are plenty of chances to see the arctic fox and mink in the area. Þingvellir is a fantastic place to experience the flora of Iceland as well, with nearly half of Iceland’s plant life growing in the park.

The landscape of Þingvellir is fascinating, due to the tectonic fissures in the area. These movement of the plates over the millennia has resulted in otherworldly rock formations, canyons and fissures in the earth. Combined with the inactive lava fields from volcanic activity in the past, the landscape of the area is unlike anything else you will see in the world.

Nestled within the amazing landscape of the Snæfellsnes peninsula and bordering the sea, Snæfellsjökull National Park is a fantastic display of all that is wonderful about Iceland. The park is particularly fascinating because it is home to Snæfellsjökull, a stratovolcano, or glacier topped volcano.

Activities and Attractions at Snæfellsjökull

A visit to the park would not be complete without taking time to admire the glacier and volcano. These can be toured on group walks, hikes and even by snowmobile. Due to the volcanic nature of the area, there are many unique features in the area, like the Lóndrangar Pillars. These towering basalt columns are situated on cliffs overlooking the sea and make for an imposing sight.

The beach at Djúpalónssandur is also worth a visit, with the obvious landscape of an area formed by volcanic activity. The beach is formed of black volcanic sand which makes for amazing photographs.

Other attractions worth visiting in the park are Buðahraun lava field, which encircles the Snæfellsjökull glacier, and Skarðsvík which is a golden sand beach.

The coastal location of Snæfellsjökull National Park makes it a fantastic place to see many different birds. Bird watching enthusiasts will be able to go view many species of coastal birds, including a number of gulls. There are also a number of coastal areas in the park which offer prime whale-watching opportunities. Arctic foxes are also regularly seen in the area.

The Búðahraun lava field is fascinating, especially to people who are keen to see examples of Icelandic plant life. Here visitors will find more than 100 species of Iceland’s flora, including many beautiful examples of the many ferns growing on the island.

The geology of Snæfellsjökull National Park is unique, even by Icelandic standards. Perhaps no other part of Iceland so aptly represents the nickname, “land of ice and fire.” The unique glacier, Snæfellsjökull, has volcanos lurking beneath the ice. As a result, the landscape of the park is diverse, with many unmistakable volcanic rock features, lava fields, beaches, craters, cliffs, and so much more to see.