A Guide to Iceland’s Midnight Sun

Everyone knows about the beauty of the Northern Lights during the darker months, but lesser known is the natural phenomenon of the Midnight Sun, a period of summer during which Iceland experiences 24-hour daylight. Here is our guide to Iceland’s Midnight Sun and why you should encounter it for yourself.

What is the Midnight Sun?

The midnight sun is a period of several weeks from the beginning of June to the end of July, whereby the sun rarely drops below the horizon. When the sun does set for just a few hours, the landscape is bathed in the dusky light, meaning it doesn’t really get dark. The peak of the Midnight Sun is the summer solstice or Sumarsólstöður, the longest day of the year, which typically falls around the 21st of June.

What causes the Midnight Sun?

When the North Pole is facing the sun, it basks in 6 months of sunlight due to the axis of the Earth. Because Iceland is a country that is fairly high in the Northern Hemisphere, it also experiences this phenomenon - however, it doesn’t last quite so long!

The level of light during the Midnight Sun means that the breathtaking scenery in Iceland is often flooded with vibrant colours. 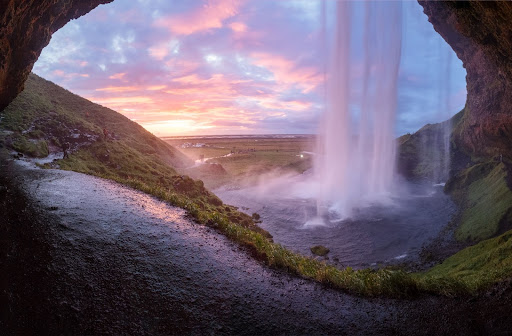 What are the best things to do during the Midnight Sun?

The midnight sun brings additional hours of daylight to enjoy Iceland, experience the culture and soak in the sights that are on offer.

The Iceland Midnight Run is a sporting event that began in 1993 and now attracts participants from around the world. Runners select their own distance of either 5k, 10k or half marathon through east Reykjavik.

2. Relax in a hot spring

Hot springs which are free and open to the public are a great place to spend an hour or two enjoying the Midnight Sun. Remember the temperature of the water in the springs can vary, so we would recommend checking it before diving in.

The Blue Lagoon offers a later closing time during the summer months.

Reykjavik always offers a great nightlife experience, but there is something extra special about the Midnight Sun which you can feel in the atmosphere. Head to Laugavegur in downtown Reykjavik and enjoy one big party.

If you want to take it to the next level, the Secret Solstice is an annual music festival held just outside of Reykjavik where you can expect 3 days of music, dancing and culture.

Whale watching is always a popular activity in Iceland, but during the Midnight Sun, it can be even more rewarding. The chances of spotting a whale are at their highest during the summer season.

Is it difficult to sleep during the Midnight Sun?

A trip to Iceland is often full of long, tiring days, hiking and exploring the scenery. This can mean that for most people when the night arrives, sleep comes easily.

Hotels are prepared for the midnight sun and will mostly have full blackout blinds, which means you can hide away from the daylight while you sleep. If you are camping or staying in alternative accommodation, you may want to bring an eye mask!

If you are planning a trip to Iceland to see what the Midnight Sun is really like, why not explore our range of vehicles so that you can enjoy touring the island on your own itinerary.