4 Alternative Things To Do In Iceland

If you’re thinking about travelling to Iceland, then you will likely have a list of things you want to go and see while you are here. You probably know about some of the major sights, such as the Blue Lagoon and the Northern Lights, but you might not be aware of all the other sights. But there are plenty of things to see and do in Iceland that you might not know about which are outside of the main cities like Reykjavik. We have created a guide to some of the best things to do in Iceland that you might not have already considered.

Not too far south-east of Reykjavik is a spectacular black sand beach that you really must check out during your trip. The beach is surrounded by amazing landscapes that provide the perfect photo opportunities and make for some Instagram worthy moments. With strange and dark caves lining the cliff face and monstrous rock formations in the sea, it really is worth a visit either during the day or night. Just a short walking distance from the beach you will find Dyrhólaey. This pillar of lava arches 120 meters into the sea and forms a peninsula. From here you can spot the magnificent Mýrdalsjökull glacier, with fantastic views of the Icelandic coastline. However, don’t attempt to swim in the sea as this is strictly forbidden due to extreme surf and strong currents. 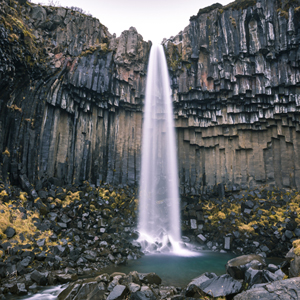 If you are interested in strange and unique landscapes then you might want to consider visiting the 4800 square kilometre Skaftafell Park. The area provides some of the most remarkable landscapes you will see across the whole of the island, with natural falls such as Svartifoss, also known as the black fall. There are a number of hiking trails and guided tours around the region for you to make the most of your time in the area. Just a short drive from the region you will find huge icebergs that float magnificently on the icy lagoon of Jökulsárlón. You can even sail on the lagoon and traverse your way through the mountains of ice that fall from the glacier.

Somewhere that you must visit when you travel to Iceland is the geothermal area 90 kilometres east of Akureyri. Lake Myvatn is the fourth largest lake in the country and was most likely formed as the result of a catastrophic volcanic eruption. The area is once again home to marvellous natural wonders and boasts some amazing hot springs. Some of these are suitable for bathing, but it is best to ask the locals as they can get very hot. The volcano Krafla is still active in the area and the landscape is formed of remarkable lava formations. Tours of the area can be useful and some include trips to Dettifoss, which is Europe’s most powerful waterfall.

For something different, head to the Hekla Volcano that isn’t too far away from Reykjavik. It is one of the most active volcanoes on earth and has served as the backdrop for numerous films, including Ridley Scott’s Prometheus. The volcano has had around 20 eruptions since the formation of Iceland and is a popular hiking destination. You can hike right to the summit of Hekla, which will take between 3 to 4 hours, and there is also plenty to see around the region. The Hekla Centre provides visitors with information and guides about the region. You should also visit the Thjorsardalur valley in the region, which has beautiful waterfalls and rock formations.

These are just some of the best alternative things to do in Iceland, other than the Blue Lagoon and the more popular excursions, but there are plenty of other things to see and do, too. Some of the regions outside of Reykjavik can be difficult to reach however, and getting guided tours for each can prove expensive. If you want to get out and explore all areas of the island then it is worth thinking about car rental. Reykjavik Rent a Car has some great deals on car rentals, including reduced prices the longer you rent! Find out more and get a rental quote today.

Download this guide as a PDF and take it with you on your trip.