Where to see the Northern Lights in Iceland

Iceland is one of the best places to see the Northern Lights, which is more formally known as Aurora Borealis. The name is an amalgamation of the name Aurora, who is the Roman goddess of dawn, and Boreas, which is the as the Greek word for the north wind. It is an elusive and unpredictable natural phenomenon- which arguably makes it even more special to see.

This means that your winter trip to Iceland doesn’t guarantee that you will glimpse the Northern Lights. However, even if you don’t see them, Iceland is a wondrous winter experience, with often heavy snowfall, beautiful sunrises and sunsets that glaze the sky with colour (not to mention Polar night, a period of time in winter during which Iceland gets almost no sunlight), and a number of winter sports for the active thrill seekers.

Below you will find information and must-know facts about the Northern Lights, what they are, what is the best time to see them, where you can find them and what to bring on your Northern lights stake-out. 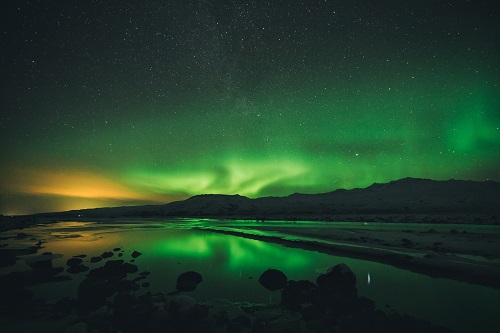 Where can I see the Northern Lights in Iceland?

The Northern Lights can be seen in multiple locations across Iceland, the ideal location for sightings change as it is dependent on various conditions. On arrival to the country, you should check Icelandic Met Office to see where it has the best chance of occurring.

In Iceland, Northern lights wake-up service is offered by some hotels nationwide.

Important to remember the Northernmost parts of Iceland provide a better chance of Aurora. Below are 5 great places to see the Northern Lights:

What are the Northern Lights?

The Northern Lights are a natural phenomenon that occurs when electrically charged particles from the sun enter the Earth’s atmosphere and collide with the gaseous particles of our atmosphere, causing the vibrant lights of the Aurora. The colour diversity of the Aurora is as a result of the variations in the gas particles that are colliding.

The most common colour of the Northern Lights is a bright green, though sometimes they appear blue and purple, and even more rarely all red.

What is the best time to see the Northern lights in Iceland?

The best time to see the Northern Lights is the end of September- late March. However, there are no guarantees, as visibility is highly dependent on weather conditions. Auroras have ongoing cycles, where they are active for 2-3 consecutive nights and then latent for 4-5 nights. It is recommended you visit Iceland for at least 7 days if you are keen on sighting Auroras, as this gives you a better chance of glimpsing them.

What should I bring on my Northern lights tour?

How to photograph the Northern Lights?

Northern lights are breath-taking, and for most, a once in a lifetime experience, so you may want to capture it in all its glory.

If you want to photograph the light display with a good camera, then you will need a wide-angle lens, ideally one with a minimum f-stop value of f/2.8 -f/4. A tripod and cable are recommended to ensure your picture isn’t blurred due to shaky hands. Camera settings vary, so it is dependent on variables specific to your camera, the subject and its environment. However, a good starting point is stated below:

You should tweak your settings within those ranges to get the best results.

If you only have a phone, and you cannot select manual settings, then there are a number of apps like Northern Lights and LongExpo Pro, and others that you can download to ensure you take the best picture.