How to get from Keflavik Airport to Reykjavik

There are many ways to get from the airport to the city, depending on how much luggage you have, how much flexibility you need, and how much you are willing to pay. Keflavik is a short distance to the city of Reykjavik, but it is much too far to walk.

No matter what, we advise you to read and make an informed choice, rather than just walking out to grab a taxi. If that’s what you eventually want, then go for it, but the price tag can stun a lot of people when they do so unaware. Here, we’ll talk you through the different options for getting from Keflavik Airport to Reykjavik. 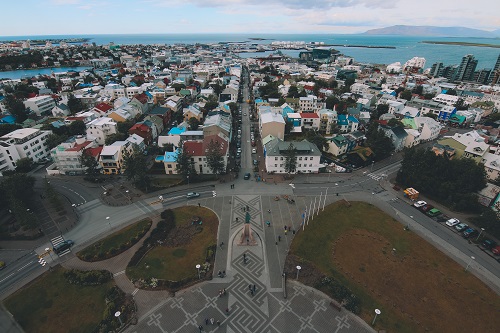 There are also taxis available at the front of the airport, which provide plenty of flexibility, but they can cost upwards of 200 euros for the journey. This is not due to them ripping you off, but simply because taxis are quite expensive in Iceland.

Most companies that offer tours around Iceland also offer Airport shuttles. If you’re already signed on with a company to be driven around to take in the sites, check whether they will offer a shuttle and whether they might discount the cost of it. Check out our article on how to get around Iceland without a car to see some taxi companies.

If you’re just looking at getting a private transfer rather than working with a single company for your entire time, it can be expensive if you are a solo traveller but becomes much more affordable if travelling with other people. You can also book a minibus if your group is up to 8 people, and becomes cheaper than paying for a bus transfer.

There are a few buses and bus companies that go from the airport to Reykjavik.

The public no.55 does the journey but is rather infrequent and uncomfortable.

The Flybus provides a 45-minute transfer, stopping once at Hotel Viking in Hafnarfjörður and Aktu Taktu in Garðabær before stopping at the BSI bus terminal. It should cost 1.950 ISK (~13 euro / $16). You can pay just a bit more for the Flybus + (2.500 ISK / 16 euros / $21), which takes the same journey to the terminal before you get a transfer onto another bus that offers drop-offs at most of the hotels and hostels in the city. Keep in mind that some hotels are in the no bus zone, so you may be dropped off at the nearest bus stop instead. However, Flybus is one of the cheapest options, and adapt their schedules to the flights (and possible delays) so there is one 35-40 minutes outside the airport after every flight. There is also no luggage restriction (for regular sized luggage) and one ticket applies for any of the buses, even if you happen to miss the first one.

Airport Direct is another shuttle bus, though they use minibuses and can drop you off directly at your hotel, rather than going to the bus terminal. This means that they theoretically take less time (though it depends where your hotel is situated) but they are also more expensive. You do have to book a ticket for a specific time and their buses only from 4:15 AM to 5:15 PM, so make sure that you arrive within that window. They also charge extra fees if you bring more than one big suitcase and one carry-on.

If you are in Iceland for more than 2-3 days, a rental car offers the greatest flexibility of travel for decent prices. Most of the major rental car agencies offer cars at the lots near the airport and will reduce the worry of getting into town, or if you wanted to immediately travel outside of Reykjavik. It is often the same price no matter where you pick the car up from, and the airport offers a free shuttle from the terminals to the rental car lots so you don’t have to worry.

If you are trying to get to the shuttle, exit the customs area, continue straight and outside, then follow a covered footpath. At the end you should find the shuttle service.

If you are trying to get to our airport offices, get on the yellow shuttle bus and get off on the 3rd stop to pick up your car. You can also rent your car there, though we do advise booking ahead.